You might have heard the term Twitter Chat or Hour and are wondering what it’s all about. We’ve written a short guide to help you get started.

A Twitter Chat is a when a group of Twitter users or (Twitterati as I like to call them!) virtually meet and tweet using the same predesignated hashtag. A host organises the chat, selects the hashtag and promote the chat. They generally occur on a weekly basis. Think of a networking event except you’re in your pyjamas on your sofa with the TV on and glass of wine in hand. Just slightly more appealing…

Well why would you go to a networking event? A Twitter Chat can offer the same opportunities; to make connections, interact with others, the chance to ask for and offer advice and of course to promote your business. Remember just because you are online doesn’t mean all common curtesy goes out the ‘Windows’. Be sure to introduce yourself and be polite. Don’t only tweet about your business. Interact with the other Tweeters and join in conversations. 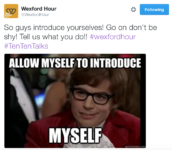 What do you talk about?

Generally a topic is decided upon by the Host. They then let the participants know what the discussion will be. Sometimes it could just be a general chat about the local area or there could be a specific business sponsoring. If thats the case each tweet will have two hashtags, the Twitter Chat hashtag and the sponsoring businesses. 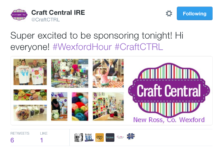 What are the best Twitter Chats and when are they on?